Taking a resilience approach to restoration in the region might be helpful as a way of addressing challenges for both the governance of conservation lands and for the development of restoration management approaches that increase the efficacy of restoration. The Chicago Wilderness Recovery Plan identified the primary factors contributing to the relatively poor ecological quality of the region’s biodiversity (Council 1999). The fragmentation of urban habitat, invasion of non-native species (and in some cases native weedy species), fire suppression and so forth, all contribute an assessment that much of the protected habitat is degraded (Consortium 2006). Specific restoration challenges in response to these issues are certainly not unique to the CW region but are substantial: removing and preventing reinvasion by problem species such as European buckthorn (Rhamnus cathartica) in woodland and savanna; managing migration rates between conserved patches, and establishing buffer zones around targeted lands in a fragmented landscape that is subject to pressures of urbanization in a large metropolitan area (See Fig 1 for Green Infrastructure Vision); and marshalling support for sometime controversial management techniques such as removal of mature trees to create savanna; removal of invasive shrubs, such as buckthorn, that are viewed by some as desirable visual buffers; use of fire near residences; culling of deer populations to prevent overgrazing; etc. In the face of these very considerable challenges CW Biodiversity Recovery Plan not only is committed to improving the ecological condition of these systems but of restoring them to “long-term viability”. The challenge of returning systems to long-term viability is an especially difficult one, however, since historically even sites that have seen improved ecological conditions need extensive ongoing management in order to sustain them (Hobbs 2007). Although restorationists recognize that management is a long-term endeavor, nevertheless it may be possible to institute more effective and efficient strategies. Reframing the challenges of restoration in the context of resilience theory may be especially helpful – we call this Resilience Oriented Management (ROM). We provide the following example to illustrate.
Major alterations to pre-settlement disturbance regimes associated with the rapid development of the Chicago region had major implications for region’s ecosystems (Bowles et al. 1996, Bowles and McBride 1998). For example, the recurrence of fire regulates vegetation along a gradient from the treelessness of prairies to closed canopy forest and is essential to maintaining these dynamic but persistent systems. As we noted, the suppression of this disturbance resulted in significant changes to habitat along this gradient (Greenberg 2002). The phenomenon of tree and shrub invasion into grassland and savanna, as well the transitioning of open-canopy woodland to closed-canopy forest, associated with changes in historical disturbance cycles is globally commonplace (Auken 2000). The phenomenon is typically examined from the perspective of a single dominant feedback process, namely fire (Robertson and Heikens 1994, Heisler et al. 2004), though there is recognition that the phenomenon of encroachment is regulated by multiple factors (Bachelet et al. 2000, Kennedy and Sousa 2006). In the Chicago Wilderness region post-settlement suppression of fire in prairies generally resulted in an invasion of woody vegetation, nevertheless, the timing of post fire-suppression invasion can vary. For example, in their study of a prairie-savanna in the Indiana Dunes National Lakeshore along the southern shore of Lake Michigan, Cole and Taylor (1995) found that even after fire suppression, occasionally flooded patches still retained prairie in addition to those areas that are on exposed south and south-westerly slopes. In drier areas there was a 78% reduction in prairie between 1959 and 1987 as woody vegetation encroached. In this case, as in most other reported case-studies, the feedbacks that maintain a system in a particular regime are complex. In the case of the maintenance of prairie, savanna and open woodland the fire cycle is crucial, however other regulatory factors, hydrological and edaphic, can be determinative for the state of the system. So, even after fire frequency changes, both the trajectory and the rate of successional changes are not always predictable. The complexity of the feedback mechanism determining a system’s state and the response of the system to changes in disturbance regimes presents a difficult management challenge. Managers have to employ restoration strategies that address both changes in the composition of the ecological community, for instance by removing woody invaders, but also rehabilitate the feedback processes that sustain the restored state. When the Chicago Wilderness Recovery Plan calls for restoring “long-term viability”, this should be understood as deriving from the management of community structure and the ecosystem feedbacks that will allow the system in the restored state. Restoration approaches that change the community structure, for example removing invasive shrubs, with the assumption that ecosystem processes will passively follow can be frustrated as the system is not shifted into a more stable regime. This may even be the case where managers have re-established the historical abiotic condi 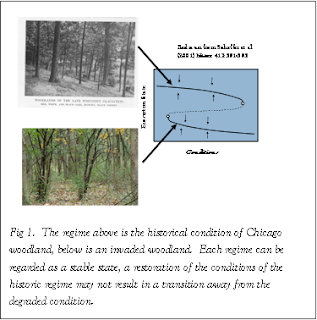 tions. This can occur because the historical system has transitioned to a new state and is therefore in a highly resilient degraded condition(Suding et al. 2004).
An understanding of alternative stable states, system thresholds and feedbacks into restoration management sensu Suding (2004) could be usefully applied to the problem of the encroachment of woody invaders in woodlands in the Chicago area. One of the dominant invasive species in this habitat is European buckthorn, introduced into the region in the late 19th C, is now among the most prevalent woody plants of the region. Although the shrub is targeted for removal in most restoration projects in the region, nevertheless it reinvades managed sites rapidly. There is some evidence that the shrub alters a range of soil properties (Heneghan et al. 2006a, Heneghan et al. 2006b), and this may contribute to the rapid reinvasion. If the degraded woodland represents a relatively stable even restoring the conditions to those which formerly had supported the historical vegetation at a site, may not result in a return to the desired vegetation. In order to effect a transition to the desired restoration goal it may be necessary to modify feedback conditions to a point where only that desired state can exist. We are currently investigating such “extreme” restoration approaches in the region (Umek and Heneghan, in prep). These resilience oriented management strategies include the use of carbon amendments to reduce the availably of nitrogen in soils with a view to promoting the competitive advantage of native over weedy invasive species (Blumenthal et al. 2003, Averett et al. 2004).
Posted by DublinSoil at 7:26 PM