Looking for Shrubs in all the Wrong Places 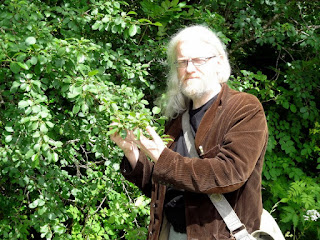 Every time I extricate a tick from near my groin I recall with fondness a trip I took with a small group of youthful botanists to the west coast of Ireland in 1984. I tagged along with third year undergraduates on the annual University College Dublin Botany Department’s field trip to the Burren in Co Clare. The trip was designed to help these naturalists hone their plant identification skills, since the Burren - a grassland on karst topography — has a truly exceptional flora. One finds botanical treasures there not readily found elsewhere. I was a zoology major and at that time my passion was for chrysomelid beetles with their shimmering metallic elytra and chironomid flies, the males of which family have those marvelous antennae that perch like out-sized Christmas trees upon their heads. I mention here, merely as a grateful aside, that my mentor for beetle work was Jimmy O’Connor for Dublin’s “Dead Zoo” (National Museum of Ireland, Natural History) and for flies it was Declan Murray from UCD. I am indebted greatly to both these excellent men.
We crossed through the Midlands early in the month of June stopping off at the Bog of Allen, a fine though now of course greatly diminished raised bog, which generation after generation of Irish folks have burned as peat to heat their damp and somewhat chilly homes. And as we approached our destination we stopped several times at sites of scientific interest. As groups of hushed botanists whisperingly conferred over the relative hairiness of sepals, the flexuousness of petals, the lanceoloation of leaves and so forth, I swept the margins of small steams with my net with giddy abandon. The art of sticking one’s head into a net of agitated insects to retrieve one’s prizes, and to transfer them to a small vial of ethanol, has not received its due attention, but we shall have to reserve that meditation for another time. Once back on the mini-bus I’d stow the net under the bus seat and we’d be off to the next venue.
As we approached Co Clare a mild clamor emerged from the botanists, upon whose finely pubescent legs — need I point to the genderlessness of this observation? — ticks were now promenading. By the time my net was recognized as the tick delivery mechanism, the little blighters has already made their greedy ascent to the humid and agreeable habitat of the nether-regions that seem to be their preference. The ticks were painstakingly removed that evening, a process for which I can admit to having a certain fondness. The trick here is patience, a steady hand, and the graduated amplification of pulling force. Ticks relent.
Now, a point I want to make here is metaphorically a rather small one. Ticks, not always noticed when in the field become a nuisance when they are in the wrong place at the wrong time. I had inadvertently transported these ticks from their point of immediate origin, and their impact was uncomfortably felt in a manner that demanded attention. These ticks that so afflicted my botanists were not, of course, themselves invasive species, nevertheless they can serve to illustrate the rudiments of invasive species biology. Invasive species are those spread by human agency outside their typical range and have an impact in the host location significant enough to warrant management action. Setting aside, for now, the terminological skirmishes over distinctions between non-natives, exotics, invasives and so on, I simply ask you to bear in mind as important the factors of transportation between locations and an impact in a new range that is assessed as consequential.
My botanists forgave me, for botanists are generally an affable and forgiving race, and we settled down to the real task of our trip, botanizing. On that trip I encountered out on the limestone of the Burren, a plant that I barely registered at that time, but that was later to assume a dominant role in my life. This was Rhamnus cathartica, or buckthorn as it is commonly known. Buckthorn is a shrub or smaller tree with alternate finely tooted leaves and spiny twigs. It is, to my eyes, a fairly pretty plant. When I saw this relatively rare Irish plant again fourteen years later it was as, arguably, the commonest woody species in the Chicago Wilderness region. Introduced from its native range across the Old World where its populations are generally small it has become, after a lag-time of several decades, explosively successful in the US Midwest. From a conservation management perspective buckthorn is “public enemy number one” since it encroaches upon, and in many instances dominates, open land set aside for conservation purposes. Much of my research work and that of students I have worked with in subsequent years has been devoted to this plant.
In the summer of 2012 I traveled back to Ireland to find buckthorn growing natively. My younger son Oisín (then 16) traveled with me. The trip was more arduous that we expected. With time ticking away we discovered that although several Irish botanists could tell us roughly where to locate the plant, none could say where a population of buckthorn was to be found with the precision required by a man with little time to spare.

Read on here.
Posted by DublinSoil at 9:18 PM