A Five Minute Nature Daydream May Make You More Energetic and Playful!

It’s the middle of the afternoon, the morning’s coffee has long worn off, and the soporific effects of that lunchtime sandwich are kicking in.  Rather than gulping down that energy drink, perhaps a little nature daydreaming might help.  Today in my urban ecology class I investigated this possibility.

The study was designed primarily to initiate a conversation about the role of nature in human health and well being.  It comes as no surprise that active engagement in nature, running, walking, engaging in restoration work, gardening and so forth has measureable benefits for human health.  A little more surprising perhaps are findings that passive engagement with nature, living in prettily landscaped surroundings has positive effects on people and on their communities.  Bordering on mystifying though are the results of studies indicating that even views of nature, pictures of nature or nature glimpsed through a window delivers benefits to people.  This skein of research became big news with the publication of Roger Ulrich’s paper in Science demonstrating that patients with views of nature through a window recovered more rapidly from surgery, required fewer post-operative narcotics, and were less testy with their nurses.[1]

So, it was with a view to opening up a discussion on this range of effects that I conducted a little experiment.  There were 16 attendees – 14 undergraduates, 1 graduate students, and 1 post-doctoral researcher.  Students were assigned one of two pictures.  One is a view down an alley in Evanston – it has both a lot of vegetation but also has garbage bins etc.  The other is of a living room (harvested from the internet) which deliberate was chosen to look comfortable and with a television. 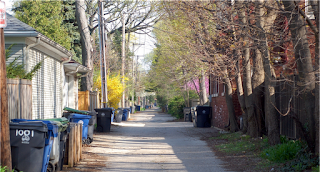 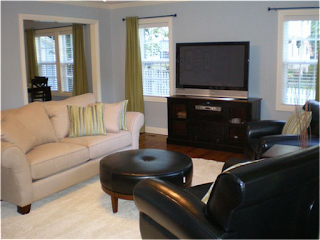 I read the following prompt: “View the picture you have been assigned.  Imagine yourself in this place and what you would typically be doing in this setting.  With the image in mind contemplate this activity for 5 minutes.  Relax, close your eyes if you prefer.  When Heneghan calls time turn over the page and answer the questions.”

Then students were asked to answer the following numerical puzzle
Mr. Brown has 8 black gloves and 8 brown gloves in his closet. He blindly picks up some gloves from the closet. What is the minimum number of gloves Mr. Brown will have to pick to be certain to find a pair of gloves of the same color?[2]

The results are summarized as follows: 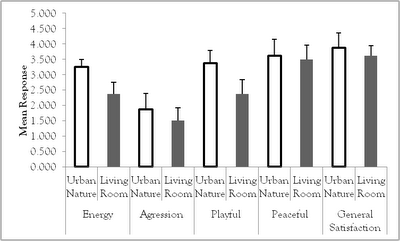 I analyzed the results using a Mann-Whitney U test (run on SAS). There are probably more appropriate ways of analyzing this data but this approach did reveal some exciting trends.  By convention ecologists report effects as "statistically significant" when there is less than a 5% chance that they are in error in reporting that two study populations differ.  This is usually reported as p<0,05. By this metric none of the responses among students was significant.  That being said several difference in responses to daydreams based upon the two landscapes were very close to this cut off point.

For instance, self reported energy levels after contemplating the urban nature scene averaged 3.25 compare with 2.375 when the living room was viewed.  Calling the two populations of viewers different in their energy levels is probably “safe”.  The probability is about 5.8% that they differ by chance (p=0.058) – good enough to be interesting.

Students arose from their micro-slumber with an average playfulness score of 3.375 when they viewed urban nature but a mere 2.375 after dreams of a living room.  The p-value associated with differences in playfulness scores was 0.065, enough to be also worth thinking about.

There were no other substantial differences in the response of viewers.  I did detect a greater restlessness of my living roomers during their 5 minutes of contemplation.  In contrast, the nature viewers were almost uniformly still and engaged in their meditation.  I guess I just thought that this was cool!

The conversation was interesting after the test.  But, I will invite the students in the class to comment if they care to.

Now, I am no social scientists, and one thing I have learned from my social science colleagues in recent years is that survey design if a complex business.  On top of this there are many design limitations in the implementation of the study.  For instance, I clustered the hand outs in the room so that students would not look at their neighbors and have a scene other than their designated one to think about.  The replication is, of course, poor.  And frankly, I didn’t have any particular well articulated question in mind, or theoretical framework in which I was working.  I was basically tooling around.  To be very clear, this is not a publishable piece of work, being designed to swell a conversation.  All of this being said, I think we were all a little shocked by the results.

Oh, in case you are wondering half of the nature contemplatives solved the brain teaser whereas only a third of the indoor crew answered correctly.

[Update: I reran this experiment with 18 more students in May 2013 - same results, almost exactly.  The reported energy difference were even stronger.  The same methodological limitations should be stressed, but the results remain, to my thinking at least, intriguing!]