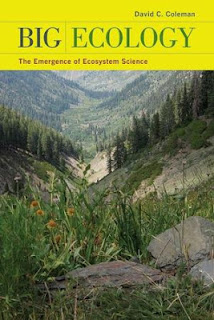 In reflecting back on the International Biological Program (IBP), one of the largest of the early attempts to co-ordinate ecological and environmental research on a global scale – Big Ecology, as Dave Coleman, Professor Emeritus at the University of Georgia calls such projects – Coleman recalls how the months away in the field and at project meetings, led to certain temptations.  Temptations were succumbed to, liaisons formed,  divorces ensued, but the progress of the science marched on.

Coleman in his latest book Big Ecology – the Emergence of Ecosystem Ecology, University of California Press (2010) (buy it here) provides a fascinating account of the background to large-scale ecosystem studies around the world, but especially in the United States. He points to the antecedent trends, provides rich insights into the contentious, but nonetheless highly productive IBP program, gives the ultimate insider’s guide to the National Science Foundation’s Long-term Ecological Research Program (LTER) and points to directions for newer programs like the National Ecological Observatory Network (NEON).

Perhaps this may sound a little dusty to you.  To look at, large-scale ecosystems experiments often have appearances that only a mother could love, and to scientists not directly engaged in them they may seem like an ungainly older sibling that their parents lavish too many resources on.  And indeed that may be so, but they are nevertheless fascinating human enterprises.  The social architecture is complex, the scope extensive, and the promise is very rich, if only because our environmental challenges are no longer just local (if ever they were).  No one is in a better position to provide a field-guide to the Daedalian labyrinth of Big Ecology than Coleman who lead the Coweeta Hydrologic Lab LTER efforts from 1996 – 2000 (which overlapped with my time at the University of Georgia).  However his research work in soil ecology stretched back IBP days.  I recall from Frank Golley’s book on the Ecosystem concept that Dave was the first researcher in the US Grassland Biome IBP to get independently funded by NSF as part of the IBP program.  He thus knows that of which he writes.

I worked as a post-doc for four years with Coleman and one of his primary collaborators Dac Crossley Jr between 1994-1998.  What strikes me in retrospect is that with these fellows I not only learned my ecosystems ecology (I was primarily a decomposition guy back then) but also learned the interdisciplinary ropes.  Dac, who is enjoying a flourishing post-retirement career as a writer of westerns, had at that time eclectic and entertaining interests, and Dave had keen insights into how a complex group of people can be brought together to undertaken a complex set of projects under the LTER.  This training has paid dividends to me in my subsequent career as an interdisciplinary researcher.

So, please, take a look at this book.  I think you will learn some things.  Things about ecology, things about collaboration, and things about people.  With many pleasing vignettes of the scientists involved in the work, and the administrators within NSF that tended to these program, the reader gets a change to poke their head behind the scenes in a way that historians of such topics may not always capture.